Even though he died young, before becoming 40 (spring 1945) Gigo Funakoshi (or Yoshitaka, depending on how you read the two kanji that form his name), Master Funakoshi’s third son had a far-reaching effect on modern Karate.

Whereas his father was responsible for transforming karate from a mere fighting technique to a philosophical martial do (way of life), Yoshitaka was in charge of developing, backed up by his father and helped by other important martial artists, a karate technique that definitively separated Japanese Karate-do from the local Okinawan art, giving it a completely different and at the same time notoriously Japanese flavor.

Yoshitaka began his formal training in karate when he was 12 years of age, but much before that he had been in contact with karate. In Master Funakoshi’s book Karate-do: My Way of Life, he recounts how he always went training Karate with his Masters, Y. Itosu and Y. Azato together with his sons, they would watch him do the kata, and then the masters would ask the boys to them too. 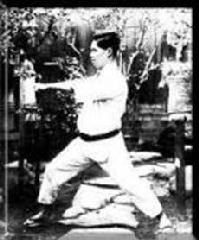 Though he wasn’t a big man, he was tremendously powerful for his size. He came to be a real phenomenon of the art, reaching an extraordinary technical level and mastery of Karate-do. He was considered, and still is by many, as the best karateka ever, at least technically and physically, it is said that Master Shigeru Egami considered him a karate genius. Egami also recounts how Yoshitaka trained with the makiwara: „His blows were terrific, he took a stance something like a horse riding stance (kiba dachi) and aimed his blows at the makiwara from a position with his arms dangling from his sides, without using his hips much. But there was no questioning the power of his blows as he lunged forward with all his bodyweight behind them. He frequently broke the makiwara in two. With this as an example we tried very hard to imitate him and practice hard with the goal of breaking the makiwara.” („The Way of Karate, Beyond Technique”, Shigeru Egami). There are many stories about Gigo’s feats, but today it is hard to distinguish truth from legend.

At the tender age of 7, he was diagnosed to be affected by Tuberculosis, a deadly illness before the advent of special antibiotics, and the doctors estimated he would not live beyond 20 years of age. Yoshitaka seems to have decided, due in part to this, to train with all his energy, to attain the highest level possible in the art of Karate, before losing the battle against death. 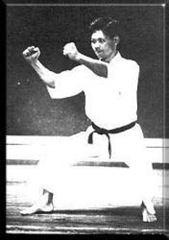 His will strength and physical strength became instrumental in the creation of new techniques. More so than his father, Gigo was the technical creator of modern karate. Thus, where the ancient tode, emphasized the use and development of the upper extremities, Yoshitaka discovered new leg techniques, Mawashi Geri, Yoko Geri Kekomi, Yoko Geri Keage, Fumikomi, Ura Mawashi Geri [though I have been informed that Kase sensei was responsible for this technique] and Ushiro Geri. All these became part of the already big arsenal of the ancient Okinawan style. The leg techniques were performed with a much higher knee-lift than in previous styles, and the use of the hips emphasized. Other technical developments were the turning of the torso to a half-facing position (hanmi) when blocking and thrusting the rear leg and hips when performing the techniques, the idea being to deliver the attack with the whole of the body.

Yoshitaka insisted on using low stances and long attacks, chained techniques, something that immediately separated it from Okinawan karate. He also emphasized the oi zuki and gyaku zuki. The training sessions were very exhausting, during these, Gigo expected his students to give twice as much the energy they would put in a real confrontation, thus they would be sure to be prepared for the actual situation if it were ever to arise.

Master Gichin Funakoshi approved without exceptions, even though what he taught, occasionally, and at least apparently, contradicted what his son instructed. Gigo was always held in high esteem, and respected by his students, thus he was in no way an impediment in the evolution of the, so-called, Shotokan style, and never created conflicts between Masters and students. 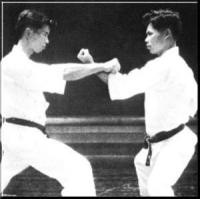 Under Gigo’s leadership big changes saw the light of day between 1930 and 1935. These were mostly in kumite (combat, free fighting training). Whereas his father placed most of the emphasis on kata, Gigo developed the fighting techniques and training. First of all he created the Gohon Kumite (predetermined sparring with five advancing attacks), a system very much like Kendo, an art that Yoshitaka also practiced and studied under the last Great Master, Hakudo Nakayama, from whom he obtained valuable inspiration for the future karate developments. In 1933 he established the Kihon Ippon Kumite (one step sparring) followed by Jiyu Ippon Kumite, just like Kihon Ippon Kumite but in movement (Yoshitaka was very fond of this form of kumite), they all inspired the kata Ten no Kata. This process ended with free sparring, Jiyu Kumite, in 1935.

Among the main karatekas that participated in the training and development team that surrounded Gigo were Shigeru Egami and Genshin Hironishi.

In 1936 Karate-do Kyohan was published, this book included the basic fighting methods but mostly it included the changes in the kata, following the newly established technique framework. This book clearly represented the birth of Karate-do as a new Japanese martial art, finally outgrowing it’s Okinawan heritage, this was very clearly established with the change in the „kara” kanji and also with the renaming of the kata with „good” sounding Japanese names.

Yoshitaka and Gichin Funakoshi published a new book in 1943, Karate-do Nyumon, where Yoshitaka is said to have written the technical material and his father the initial chapters and the historical section.

As everybody already knows, unfortunately for the Karate world, and as a result of the very difficult life conditions during the II WW coupled with the hard and merciless trainings Yoshitaka subjected himself to (even with terrible and bloody coughing fits), the sickness that followed him for so many years finally caught hold of him, thus the brilliant shooting star that Gigo represented for Karate, was extinguished.

It is easy to speculate about how the history of Karate would have developed if Yoshitaka hadn’t died so young. Egami himself speculates in his book „The Spirit of Karate”, seeing the sorry state of modern karate (sports karate), where there is a greater interest in winning championships or learning fighting techniques, than following karate as a way of life. As my Sempai tell me, surely the Karate world would be totally different today, had he lived more, there would not have occurred the splitting in Shotokan/Shotokai, etc, nor would there have been sports karate.

But speculating is not the way of ending an article on the great Gigo Funakoshi. One thing is sure, he is, and always will be, an inspiration for all the Shotokai Chile karatekas. His legacy is with us in every basic technique, every leg technique, in the Ten no Kata, in the different kumite trainings, his influence lives with us and within us every day through our Karate.