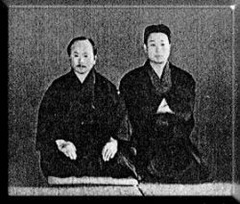 Takeshi Shimoda was Gichin Funakoshi’s assistant and instructor and was the most talented of O-sensei’s students (in Shigeru Egami’s words) in the early thirties. He traveled around Japan together with Egami among other Funakoshi followers giving demonstrations of Karate. He was an expert in Kendo of the Nen-ryu school and also studied Ninjutsu.

He became seriously ill after one of the demonstrations and died soon afterwards, he was still in his thirties.

„He wasn’t a big man, and he kept a low posture; he didn’t seem to hit the striking-post very powerfully. I was amazed to find out that he practiced a thousand punches with one fist everyday, and when it rained, he would practice anyway with an umbrella over his head. I was even more amazed when I was made to stand before him and receive his punch. Although his blows were light, I simply could not ward him off, no matter how hard I tried”

It was a very hard blow not only for O-sensei to lose him so early in his life, it was also put Karate in a very complicated situation, how to replace him. His duties were taken over in a very favorable way by Yoshitaka (Gigo) Funakoshi.