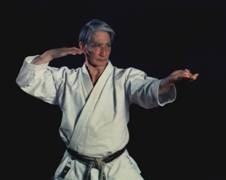 his karate training in 1943 under Gichin Funakoshi at the Shoto- kan. Two years later, while enrolled at Takushoku University, he became a member of the university’s karate team, for which in 1949 he was named captain. He was a co-founder of the All Japan Collegiate Karate Federation and was elected its first chairman.

Nishiyama received a Master of Arts degree in economics from Takushoku University in 1951. That same year, he was a co-founder of the Japan Karate Association (JKA) and was elected to the JKA board of Directors.

In 1952, he was selected as a member of the martial arts combat instruction staff for the Strategic Air Command (SAC) Combat Training Program. SAC personnel received training in judo, aikido, and karate at the Kodokan. The other karate instructors for this program included Gichin Funakoshi, Masatoshi Nakayama, and lsao Obata. In 1953, SAC invited Nishiyama as part of a 10-member Budo Mission from Japan. The team visited SAC bases in the U.S. for three months giving instruction in karate, judo,and aikido.

Karate: The Art of Empty-Hand Fighting co-written with Nakayama and published in 1960, is even today considered the definitive text book on the subject. In its 70th printing, (2, 000 copies per printing) it is believed to be the best selling karate text book in history.

In July 1961, SAC karate students and JKA members residing in the United States invited Nishiyama to visit America. Later that year, he organized the All American Karate Federation (AAKF) as a nationally based amateur karate organization. In November of the same year, Nishiyama organized under the control of the AAKF the first National Karate Championship in Los Angeles, California where he also established his dojo.

Since then Nishiyama has been a major force in the propagation of the Shotokan style of karate in the U.S. and abroad. In 1965, Nishiyama organized a committee with the cooperation of the major Japanese karate styles that led to the first United States vs. Japan Goodwill Karate Tournament. Because of the participation of the All Japan Collegiate Karate Team, this event became the first truly international karate competition.

In 1968, Nishiyama organized the first World Invitational Karate Tournament held at the Los Angeles Sports Arena in conjunction with the Olympic Commemorative Tournament hosted by the Mexico Karate Federation in Mexico City. A conference which took place during the tournament culminated in an agreement to form an international karate organization and to hold its first World Championship in Tokyo. In 1970, during a reorganization of the AAKF as the traditional karate governing body, the JKA Karate group separated and became the JKA-US, part of the AAKF. Nishiyama continued as Chairman of the JKA-US and also as Chairman of the AAKF. In April of that same year, the AAKF became a member of the U.S. Olympic Committee.

In 1973, Nishiyama co-founded the Pan American Karate Union (PAKU) and was elected its First Executive Director. The first PAKU Championship was staged in Rio de Janeiro.

Based on a 1968 agreement formed at a Mexico City conference, tournaments were held in Tokyo (1970) and Paris (1973).These World Championships resulted in disagreements caused by the lack of formal international organization. An international meeting later followed in New York City resulting in the formation of the International Amateur Karate Federation (IAKF) with Nishiyama elected as its Executive Director. The first IAKF World Championship was held in Los Angeles in 1975.

He oversaw the formation of the Mediterranean Karate Championship Committee and Bolivian Karate Federation in 1976. Also that year, acting on behalf of the IAKF, he submitted an application to the International Olympic Committee seeking Olympic recognition for Karate.

Nishiyama’s reputation has spread foremost because of his superior technical expertise and his disciplined instruction. Among his former students are All Japan Karate Champions Hiroshi Shirai and Takeshi Oishi. He trained a host of international and national instructors, national champions and celebrities. Nishiyama continues to instruct at the Central Dojo in Los Angeles and conducts a busy schedule conducting seminars and courses around the U.S. and abroad. He also is producing new texts and manuals as well as instruction video tapes concerning traditional karate.